Today I found out the first legal slave owner, in what would eventually become the United States, was a black man.
The man was Anthony Johnson.  Johnson first came over to America as an indentured servant, arriving in 1620 in the Colony of Virginia.  He did not come over willingly, as many did, agreeing to become indentured servants in exchange for passage to the New World. Rather, Johnson was captured in Angola by neighboring tribesmen and eventually sold to a merchant who transported him to Virginia, where he was then sold to a tobacco farmer.
Despite this, Johnson was not technically a slave, as most think of it.  He was simply required to serve the farmer for a time in exchange for room and board.  However, like slaves, indentured servants could be sold or lent out to someone else, and, for the most part, they could be punished how those that owned their contracts saw fit.
One of the biggest differences between slaves and indentured servants was that once the indentured servant’s contract was up, depending on the agreement made with the person paying for transport, often the former servant would be given some small compensation for their services to help them get their start as free individuals.  This might include some amount of land, food (often a year’s worth), clothing, and tools.
During their time serving, indentured servants also typically learned some trade as they worked, which was significant for many who chose to make the journey to the Americas as indentured servants- often poor, uneducated individuals, lacking a trade, and in search of the promise of a better life.  Because of this, in the early days, most indentured servants in the British colonies in America were actually Irish, English, German, and Scottish, rather than African.
Johnson, of course, didn’t choose to come over. Nevertheless, once in America, he toiled away as a tobacco farmer for the duration of his contract.  During this time, he also met a woman (soon to be his wife) named simply “Mary”, who had been brought over to America about two years after Johnson, with her contract also being purchased by the same man who owned Johnson’s contract.
In 1635, after working on the tobacco farm for about 14 years, Johnson was granted his freedom and acquired land and the necessaries to start his own farm.  Sources are conflicting on whether he purchased the remaining years on his wife’s contract or whether she completed it, but in the end, the two, with their lives now their own, began working for themselves.
They soon prospered and took advantage of the “headright” system in place for encouraging more colonists, where if you paid to bring a new colonist over, whether purchasing them at the docks or arranging it before hand with someone, you’d be awarded 50 acres of land.  Similarly, those who paid their own passage would be given land under this system.
This leads us to 1654. One of Johnson’s servants, John Casor who was brought over from Africa, claimed he was under a “seaven or eight yeares” contract and that he’d completed it. Thus, he asked Johnson for his freedom.
Johnson didn’t see things this way, and denied the request. Despite this, according to Casor, Johnson eventually agreed to allow him to leave, with pressure supposedly coming from Johnson’s family who felt that Casor should be free.  Thus, Casor went to work for a man by the name of Robert Parker.
Either Johnson changed his mind or he never said Casor could go, because he soon filed a lawsuit against Parker claiming that Parker stole his servant, and that Casor was Johnson’s for life and was not an indentured servant.
Johnson ultimately won the case, and not only did he get his servant back, but Casor became Johnson’s slave for life as Johnson had said he was.  This officially made Johnson the first legal slave owner in the colonies that would eventually become the United States. (There were other slaves before this, just not ones that were legal in the British colonies under common law).
The judge’s decision on the matter was announced as follows:

About 7 years later, Virginia made this practice legal for everyone, in 1661, by making it state law for any free white, black, or Indian, to be able to own slaves, along with indentured servants, as they’d been able to have before.
While Johnson’s temporarily gain of being granted the services of one of his indentured servants for life no doubt had a positive affect on his thriving business, ultimately the gradual changing of attitudes in the colonies concerning slavery and race came back to hurt Johnson’s family, with slavery slowly becoming less about one’s original financial situation and more about where you or your ancestors were originally from.
When he died in 1670, rather than his thriving plantation going to his children, the court declared that “as a black man, Anthony Johnson was not a citizen of the colony” and awarded the estate to a white settler. Quite a contrast to the declaration in 1654 by the court that Johnson and his wife were “…inhabitants in Virginia (above thirty years) [and respected for] hard labor and known service.” 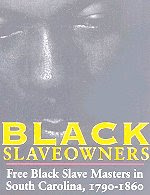 Black Slaveowners: Free Black Slave Masters in South Carolina, 1790-1860 An analysis of all aspects and particularly of the commercialism of black slaveowning debunks the myth that black slaveholding was a benevolent institution based on kinship, and explains the transition of black masters from slavery to paid labor. T