Le Chateau spells it out, in support of Rep. Steve King's statement of the obvious.


Steve King ✔ @SteveKingIA
Wilders understands that culture and demographics are our destiny. We can't restore our civilization with somebody else's babies.
Steve King is right. You can wave your final goodbye to White American civilization if some other tribes are having all the babies. The future belongs to those who show up, and the shape of that future depends on the innate character of its inheritors. That’s Stone Cold Truth 101, and it’s the truth that has bedeviled suicide signaling leftoids for generations, and driven them into increasingly insane postures of delusional doublethink, obscene hypocrisy, and hoary lies.

THERE IS NO MAGIC DIRT.

NATIONS ARE GROUPS OF PEOPLE, NOT LINES ON A MAP.

THERE ARE NO MAGIC WORDS.

AMERICA IS A NATION. AMERICANS ARE A PEOPLE.

X CAN NEVER ALSO BE NOT-X.

CIVILIZATION IS NOT GUARANTEED. 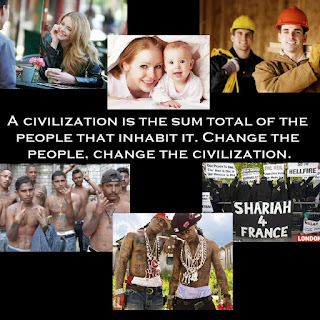