As dark lords go, I am, as most of you know, unusually civil. Having asked one of my GGinParis co-hosts to write a foreword for one of my books, I thought it would be a grievous breach of etiquette to fail to request the same of the other. So, I am pleased to announce that the aforementioned Editor-at-Large has already written the foreword for my next book, which I have written with a fellow American Indian (albeit one from a different tribe). It is expected to be released before the end of year. It is a hard-hitting book in the vein of SJWAL, but addresses an even more important and controversial subject: the politics of American immigration. 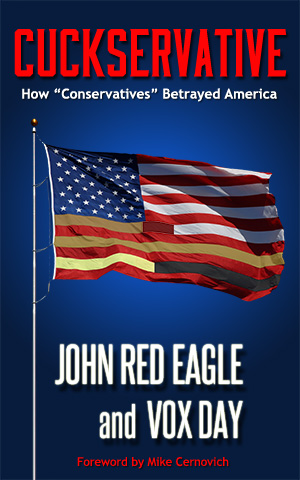 The Preamble to the Constitution of the United States of America contains an extremely important phrase that is almost always ignored by those who appeal to it, or to the men who wrote it, in defense of immigration. It states:

We the people of the United States, in order to form a more perfect union, establish justice, insure domestic tranquility, provide for the common defense, promote the general welfare, and secure the blessings of liberty to ourselves and our posterity, do ordain and establish this Constitution for the United States of America.

To sacrifice their interests to the interests of children in other lands is to betray both past and future America. It is to permit an alien posterity, like the newly hatched cuckoo in another bird's nest, to eliminate our own, and in doing so, defeat the purpose of the Constitution. It is, like the cuckolded husband, to raise the children of another man instead of one's sons and daughters. It is, in a word, cuckservative.

Cuckservative: How "Conservatives" Betrayed America will be published in December by Castalia House.
Posted by Conan the Cimmerian at 8:41 AM No comments: